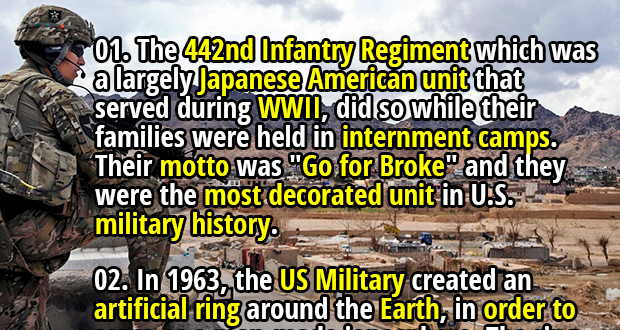 About 25% of US Army soldiers in Vietnam were intentionally-recruited "misfits" who couldn't read and write, had an IQ of below 75, and/or dropped out of high school. Some didn't even know that the US was at war. They had 3x the casualty rate of regular soldiers. This controversial program was named Project 100,000.

2. The 442nd Infantry Regiment which was a largely Japanese American unit that served during WWII, did so while their families were held in internment camps. Their motto was "Go for Broke" and they were the most decorated unit in U.S. military history.

3. The American Army during WWI employed champion Skeet Shooters to protect the trenches by shooting enemy grenades out of midair and deflecting them.

5. The "Lost Battalion" refers to the 211 Texas Guardsmen that were surrounded in the Vosges Mts. in 1944. They were saved by the Japanese-American 442nd Regiment, which suffered over 800 casualties while effecting the rescue. Veterans of the 442nd were later made "honorary Texans" in 1962.

The US military once considered building a "gay bomb," with an aphrodisiac chemical that would provoke widespread homosexual behavior among troops, causing what the military called a "distasteful but completely non-lethal" blow to morale.

7. There is a gag gift called "liquid a*s" that smells so badly the US military uses it for hyper-realistic combat training for medics to experience corpses or individuals with severe abdominal injuries.

8. United States Army had a tactical deception unit called "Ghost Army" during World War. It consisted of 1100 soldiers, their job was to deceive the enemy by inflatable tanks, sound trucks, and fake radio transmissions.

9. Castner's Cutthroats was a platoon of Army scouts who served in the Aleutian Islands Campaign of WW2. The group was composed of trappers, hunters, miners, and Native Alaskans. They seldom used ranks and never wore uniforms. In addition to recon missions, they fought in the bloody Battle of Attu.

10. The United States has military equipment stashed away in large caves in Norway so that if they need to defend them, the U.S. can just fly in troops and use the prepositioned equipment.

When the military wears the American flag on the shoulder, the starfield needs to always face forward. So on the right shoulder, the flag is backward.

12. Operation Paul Bunyan was launched in response to the Korean Axe Murder Incident where Americans trimming a tree in the DMZ were killed by North Koreans. The US went back to cut it down, bringing with them overwhelming firepower with hundreds of soldiers (some with suicide vests) and air support.

13. The Oath taken by US Military Officers requires that they bear allegiance - not to any US President or other government official - but only to the Constitution of the United States, which they are sworn to support and defend against all enemies, foreign and domestic.

14. The 555th Parachute Infantry Battalion was an all-black airborne unit. Instead of overseas deployment, they fought wildfires started by Japanese balloon bombs on the US west coast. The "Triple Nickles" parachuted directly into affected areas for half the fires they fought.

15. The US military has never banned the use of napalm on military targets away from civilian areas and still has a type of bomb very similar to napalm called the Mark 77 that has been used in both Iraq and Afghanistan.

Only 9 US military officers have held the 5-star rank. It was created during WW2 because US officers were often commanding allied officers of higher rank. A 5-star officer cannot retire and remains on active duty for life. It was retired in 1981 on the death of General Omar Bradley.

17. The US Military still uses 8-inch floppy disks on outdated IBM computers to run the nuclear missile systems. It's because they are incredibly hard to hack. The computers are essentially air-gapped and the old IBM computers are reliable. They could run for another 40 years with spare parts.

18. The US military developed special cold weather boots called Bunny Boots which feature a full inch of wool lining. Each boot weighs 1.5kg and they can be used in -58°C temperatures.

19. The 761st Tank battalion was made up of almost completely African-American tankers. It was considered one of the best tank units of the war and held 1 Medal of Honor winner, 11 Silver Stars, and 300 Purple Hearts.

20. The worst breach (Operation Buckshot Yankee) of U.S. military computers in history happened when someone picked up a memory stick they found in the parking lot and plugged it into their computer, which was attached to United States Central Command.

Fentanyl lollipops are used in the US military to treat combat casualties. They are taped to the victim's finger so that, once sedated, they let the lollipop fall from their mouth to reduce the chance of overdoses.

22. In 1963, the US Military created an artificial ring around the Earth, in order to serve as a man-made ionosphere. The ring was made of copper needles and was used for worldwide communications in the case that the Soviets disabled all other methods of communication.

23. The US military considers suicide to be a crime, and service members have been sent to prison for attempted suicide.

24. The US military had a backpack nuke (S.A.D.M.) that could be carried by a single person.

25. During World War 2, the US military developed a chocolate bar designed for difficult climates. The treat was Dubbed “Hitler’s secret weapon” by troops for its taste and difficulty digesting.