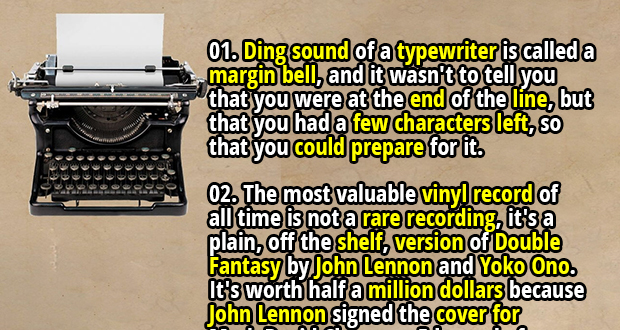 Warning: Use of undefined constant start - assumed 'start' (this will throw an Error in a future version of PHP) in /home/frp1193/public_html/wp-content/themes/Newspaper/functions.php on line 159

Warning: Use of undefined constant total - assumed 'total' (this will throw an Error in a future version of PHP) in /home/frp1193/public_html/wp-content/themes/Newspaper/functions.php on line 161

Warning: Use of undefined constant detail - assumed 'detail' (this will throw an Error in a future version of PHP) in /home/frp1193/public_html/wp-content/themes/Newspaper/functions.php on line 163

About 85% of hospitals still use pagers because hospitals can be dead zones for cell service. In some hospital areas, the walls are built to keep X-rays from penetrating, but those heavy-duty designs also make it hard for a cell phone signal to make it through but not pagers.

2. The B-side of the cassette release of "In God We Trust, Inc" by Dead Kennedys is left blank. The B-side label states "Home taping is killing record industry profits! We left this side blank so you can help."

3. The Gameboy had a sonar add-on for fishermen, that could locate fish up to 65-feet deep. It also included a fishing mini-game.

4. Polaroid cameras don't have batteries. They instead have an individual battery in each cartridge to power the camera enough to take the required shots.

5. In 1994, IBM released a cell phone named IBM Simon with a touch screen and e-mail. It could also send and receive faxes, work as a pager, and was considered the world's first smartphone due to its features and capabilities.

Punchcards were invented to solve the problem of the 1890 US Census. It took 8 years to process the data of the 1880 census, so Herman Hollerith invented punch cards for tabulation, ushering in the era of data storage, databases, and supercomputers.

7. The most valuable vinyl record of all time is not a rare recording, it's a plain, off the shelf, version of Double Fantasy by John Lennon and Yoko Ono. It's worth half a million dollars because John Lennon signed the cover for Mark David Chapman 5 hours before Chapman murdered Lennon.

8. On a hill overlooking the ocean in Otsuchi Town in northeastern Japan is a phone booth known as the "Telephone of the Wind". It is connected to nowhere, but people come to "call" family members lost during the tsunami of the 2011 Great East Japan Earthquake.

9. In 2007, an MP3 player called “iBeat Blaxx” had to be rebranded after causing controversy due to its name.

10. The groove on a vinyl record is on average around 500 meters long.

12. Ding sound of a typewriter is called a margin bell, and it wasn't to tell you that you were at the end of the line, but that you had a few characters left, so that you could prepare for it.

14. The smallest Discman ever made was smaller than a CD.

15. Betamax was actually the superior recording system, but consumers didn't consider the better performance to be worth the extra cost.

CRT monitor images can become flipped and distorted depending on which hemisphere you are using it in. This is due to the Earth's magnetic field affecting the path of the electron beam.

17. When the VCR was invented, film companies tried to make it illegal due to the possibility of recording copyrighted material, in a case that reached the Supreme Court. The head of the MPAA compared the effect of the VCR on television to that of the Boston Strangler on women.

18. Fax machines could send photographs over telephone lines as early as 1902.

19. Laserdisc copies of 'Who Framed Roger Rabbit' released in March 1994 featured frames of a nude Jessica Rabbit left in by animators as a joke. Stores sold out of the disc minutes after they went on sale.

20. The VHS/Betamax war of the 80s/90s spawned a little known 10-hour VHS cassette, enough to record the entire LOTR trilogy on one tape.

When the telegraph appeared in the 19th century many early telegraph operators were young men and women who often used their machines to chat with each other and even arrange dates. The telegraph was thus a forerunner to modern chat and dating apps.

22. Rotary payphones were reinstalled during the '80s and 90's to discourage drug sales because they couldn't be used to call dealer's pagers.

24. Old school computers like the Apple could save and load games to/from cassette tapes in a tape recorder. This basically worked by interpreting the audio data as game data. This prompted some pirate FM radio stations in the 1980s to broadcast games right over FM radio every weekend.

25. Back in the 1980’s people were able to download Video Games from a radio broadcast by recording the sounds onto a cassette tape that they could then play on their computers.